Billy Strayhorn helped create the world known as “Ellingtonia,” but his music was a world of its own. 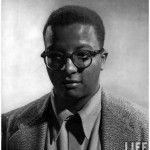 The Billy Strayhorn Orchestra has presented the composer’s works for big band for more than ten years at major venues in the New York area, including St. Peter’s Church, Jazz at Lincoln Center, and the Winter Garden.

You can watch this video of the band performing Billy Strayhorn’s compositions, including the rare “All Day Long” and “Pentonsilic.”

Born in 1915, Billy Strayhorn became an arranger for the renowned Duke

Ellington Orchestra at the age of 24. He shared composing, arranging, directing and piano duties with the master himself until his untimely death in 1967. Strayhorn produced prodigious amounts of music for Ellington and many others, including Johnny Hodges, Lena Horne, and The Copasetics. Like Ellington, Strayhorn had a wide-ranging and forward-looking musical mind. Having helped bring big band jazz to its fullest flowering with the Ellington orchestra, and having also been in tune with the first wave of modern jazz or bebop, Strayhorn is often cited as a formative influence by jazz composers and arrangers who came afterward. Strayhorn’s artistic collaboration with Ellington was—like their friendship—very close, so close in artistic terms that in some cases it has been hard to tell who actually wrote what. The band with soloists Freddie Hendrix and Lauren Sevian.

Our repertoire includes works Strayhorn alone wrote for the Ellington orchestra, including famous pieces like “Chelsea Bridge” and “Raincheck”; rare, newer versions of hits he wrote for Ellington, such as “Take the A Train”; and rarely heard works which Ellington never recorded, such as “Swing Dance,” “Pentonsilic,” and “Cashmere Cutie.”

Alto saxophonist Michael Hashim has frequently performed and recorded music associated with Duke Ellington and, particularly, Billy Strayhorn. He won a National Endowment for the Arts grant in 1989 in support of “Lotus Blossom,” a CD devoted to Strayhorn’s music, and was nominated for British Jazz Album of the Year for a second Strayhorn album, 1999’s “Multicolored Blue.”

Performers in the video sample are as follows:

Researcher and educator Walter Van de Leur worked for many years to create the orchestrations of the songs we perform using manuscripts written in Strayhorn’s own hand. We would like to thank the Strayhorn Family and Estate for their kind support.

“The concert concluded with two of Strayhorn’s more familiar compositions, “Passion Flower” with some beautiful alto work by Hashim, and “Raincheck” featuring some fine piano from Mike LeDonne, and Tad Shull’s tenor mastery . . . The band was simply superb, and Hashim was obviously having a grand time leading such an impressive aggregation.”

“The Billy Strayhorn Orchestra, led by alto saxophonist Michael Hashim, @ Miller Theater, NYC — A rare presentation (thanks, Center for Jazz Studies, Columbia University), including ‘world premieres,’ of heartbreakingly lyrical, Ellingtonian yet ultra-original jazz tone poems, suitable for dancing but detailed as any concert music. Strayhorn’s sumptuous arrangements of ‘Bloodcount’ and ‘Chelsea Bridge,’ a cubist version of ‘Take the ‘A’ Train’ and ‘The Intimacy of the Blues,’ a distillation, were played impeccably by a big band of aces who haven’t worked together in six years.”